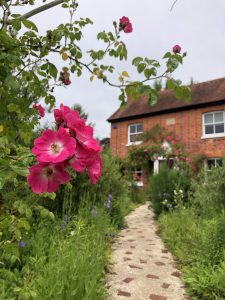 Mount Vernon is the name of the 19th Century cottage where Dr. Edward Bach, who discovered the Bach flower remedies, lived and worked during the last years of his life. About us.

You will find us in the heart of the Oxfordshire village Brightwell-cum-Sotwell, near the market town of Wallingford.  Mount Vernon is the Bach Centre and remains the nucleus of Dr Bach’s work.

Edward Bach died in 1936, leaving his work in the hands of his assistants Nora Weeks and Victor Bullen. He asked them to promise to honour the simplicity and completeness of the system, and not to complicate it.

Along with Mary Tabor, a local resident, Nora and Victor continued to make remedies and hold consultations. Mary left the village a few years later, but Nora and Victor carried on running the Centre until the late 1970s, helping people use the system and spreading the word.

Nora and Victor’s successors at the Centre, from Nickie Murray and John Ramsell to Judy Ramsell Howard and Stefan Ball today, have all made and kept that promise, and future generations will too.

We made and exported remedies from Mount Vernon for many years, but demand eventually outgrew our capacity.

We moved the bottling and labelling in the early 1990s to a more suitable local facility. Nelsons, which we had a long-standing relationship with since Dr Bach’s day, managed the facility for us. We later passed the responsibility for this aspect of the work to them entirely.

The Centre today focuses on education.  One-day seminars started in 1991 and quickly generated a demand for practitioner training. Our own courses were followed by a programme of Bach Centre-approved courses, taught to our standards in many languages and many countries.

We now have thousands of trained Bach Foundation Registered Practitioners on our Register, all committed to respecting Dr. Bach’s philosophy and the simplicity of his original teachings and helping people where they live to understand and use his system to help themselves.

Although we no longer make remedies commercially here, the Bach Centre continues to communicate and remain true to Dr. Bach’s principles and teachings. It is that message of simplicity and completeness that lies at the heart of all we do.

This is the About us page for the Bach Centre.