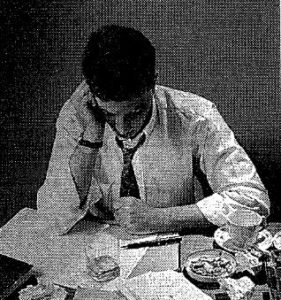 Thank you to everyone who entered the competition. It was a difficult job deciding on a winner because there was quite a diversity of background reasoning and several interesting and plausible remedy suggestions among the entries received.

The most frustrating thing about only having a photograph to go on is the inability to ask any questions. Dr Mukherji from Edinburgh asks: “What has he been trying to write? What is it all about? Is it a letter to his girlfriend breaking their engagement, a letter to his employer with his intention to resign, or a letter to his parents asking for money with some terrible news that he is broke and gambled the last lot of money?”

It would also be helpful to know at what stage of the day the photo was taken – was it in the middle fo the day when a chaotic state of tension might be typical, or was it after everyone else in the office had gone home, and only then felt able to relieve the bottled up frustration, or had he been working all night, and this was actually the start of a new day? Depending on the answers to these and many other questions, all kinds of possible states of mind and corresponding remedies could be equally relevant.

However, when there is only a snippet of information – in this case, a moment’s observation of posture and expression – the surrounding detail is open to debate, and in such subjective circumstances, there can be no right or wrong answer.

But, going solely on what we can see, the picture would seem to suggest frustration, tension, dejection and a feeling of being overwhelmed. It could suggest anger, mental arguments, hidden mental torture, exhaustion and many other states of mind as well but these states are not readily obvious, and in the absence of supporting evidence, would be assumptions. Nevertheless, you were invited to create a possible scenario, which gave you the freedom and scope to make up a story-line and choose virtually any remedies you liked. All you needed to do was write a convincing story and provide sound reasoning for your selection.

Margaret Foster supposed that he might have had a row with his wife and he is writing to her to explain how he feels. Brenda Henderson suggests that rather than writing a letter, he is looking at his finances and fears that he has lost his business. And Catherine Mowat saw frustration and an air of despondency, and thought that he might be a student Bach practitioner, staring at blank sheets of paper, lost for new ideas!

With such a diversity of suggested scenarios and corresponding remedies, it was a difficult task to decide on a winner. But after much deliberation, we are pleased to announce that the winning entry was from Christine Newman of Dorset who choose Sweet Chestnut for the dejected expression and “shoulders that are rounded under the burden of his worry”, Olive because “the loosened tie, discarded jacket, cigarette ends and empty cup suggest that he has struggled with the problem for many hours”, and Agrimony because “having stayed late at the office, the cigarettes and whisky indicate an attempt to dull the mental torture.

Whilst all remedy selections are open to debate, in our opinion Christine gave the best combination of descriptive reasoning and valid evidence for the remedies she chose.

Many congratultions to Christine, and a big thank you and well done to everyone who entered the competition. We hope you enjoyed doing it as much as we enjoyed running it. We hope it will be the first of many.

We are looking for someone to help mark the essay papers which form part of the practitioner training course assessment. This is obviously an important job and the person we are looking for would need to demonstrate that they have good skills in marking as well as experience and depth of knowledge sufficient to offer a thorough appraisal of the work being marked.

If you are interested in being considered for this work, please tick the box on the response form and we will send you further details.

As explained in the last Bulletin, the new registration renewal fee came into effect on 1st May. One or two practitioners have expressed their concern about possible financial difficulties in meeting this annual fee. We do not want anyone to feel that difficult financial circumstances prevent them from maintaining registration and we would like to reassure you that if anyone cannot afford the fee, they must let us know and we will do what we can to help.

We have received a letter from a Mr Roger Yates who is setting up a web site devoted to complementary therapy within the UK. There are sections covering various therapies, each including a list of practitioners in county order.

An entry in the Natural Health Guide, consisting of name and telephone number is free of charge for qualified and insured practitioner. An email facility is also available for practitioner who already have access to the internet.

In addition, pracitioners who would like a full web page (e.g. based on a personal leaflet) can pay an annual fee of £60. The standard entry would then be linked to their Home Page.

If you ware interested in either the free entry, the full web page, or both, please constact Roger Yates in Shopshire.

Adriana Brinsmead-Stockham from Kingston-upon-Thames has sent in an interesting article about choosing remedies to help during holiday times. She writes:

We’ve all known that feeling, one time or another: here is the much-needed, long-awaited, well-deserved holiday, but we spend too long at the start of it trying to relax, and then waste the last part of it worrying aobut what’s going to be waiting for us when we get home.

My husband’s job, reasonably demanding at the best of times, is destined to reach an all-time peak at the end of this summer until Christmas at least. Coupled with this, all things gong well, we are moving house in the middle of the year. It is therefore very important that he switches off and relaxes during our upcoming holiday at the end of May, so that he is recharged for the rest of the year.

I started to think about which remedies would be good for him. For example, Honeysuckle to stop him thinking about all the things he should have done before he went away. But then I also want to stop him thinking abou all that’s waiting for him when he gets back – Clematis. These two remedies should help keep him in the present. But what about at night, when he’s going to be lying in bed worrying aout various problems he has to resolve – White Chestnut.

I’d also like him to be able to change his hectic pace of life and adapt to a more relaxed mode for a couple of weeks – Walnut. I also want to add his type remedy, which happens to be Agrimony as he loves to tell everyone he is fine and keep any problems to himself. He’s always thought of as the relaxed and laid back one by his colleagues – the one who never gets stressed! Then I started to think about his tendency towards travel sickness and decided that I may as well add some Scleranthus just to round it all off!

Adriana’s husand is clearly an Agrimony type, so this remedy is important for him. All all-round “holiday mix” is an interesting thought, but the needs of people vary so much that no one mix will suit all needs – the combination required may be entirely different for each individual. Would anyone else like to share their personal recipe for a peaceful holiday?

In answer to your appeal in the last Bulletin, I am wondering if the following experience in the use of the remedies would be of interest.

For many years I have had great difficulty in tolerating certain aspects of my very kind and caring sister’s behaviour. A suggestion on my part about trying the remedies was very firmly brushed aside.

My daughter, to whom I talked about the problem, suggested that I take the remdies I would prescribe for my sister myself. This I have proceeded to do when we meet. Certainly I find that this eases the problem for me.

Has anyone else had a similar experience? Given that we encounter situations in life from which we need to learn appropriate lessons, it does make a great deal of sense.

Comments would be much appreciated.

The above situation raises some interesting issues. Taking it on face value, i.e. the suggestion that one might benefit from remedies which have actually been chosen for someone else, seems to go against all the principles of individual selection.

However, if we look a little more deeply, perhaps what is really happening is actually self-criticism – seeing personal defects as faults in other people. The phrase “I can’t tolerate intolerant people” is a classic example of this. Therefore, considering what we dislike most about others may help us know ourselves a little better and highlight where our true values lie. In turn, this may help us recognise the issues which need correcting and the remedies to deal with them.

In the last Bulletin we gave details of a group insurance proposal from CE Heath. The terms quoted were subject to a minimum of 50 people. Unfortunately only ten practitioners indicated they were interested in the scheme. We will keep the details of these practitioners on file, but at the moment it seems the overwhelming majority of you have already obtained you own insurance cover.

The refresher days are here! See the education section for more details…

Thank you to everyone who has contributed to this Bulletin. Our combined good wishes to you all.