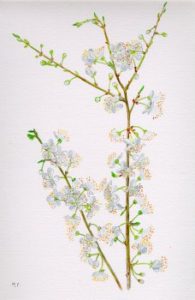 We received the Spring edition of “Grace” in the post this morning, and on opening it turned to this poem. This, together with the fresh sunny weather we have been enjoying recently, has inspired the spring Bulletin!

Early spring, of course, is the beginning of the remedy season. The Cherry Plum blossom is now fading, the Aspen and Hornbeam catkins are out, and it will not be long before the other remedy trees are ready. Once they start, there’s no stopping them, so no doubt a busy spring awaits us…

We have recently received a few enquiries as to why the label on the Nelsons remedies now states that the remedies are preserved in a “grape alcohol solution” instead of brandy, and one or two letters from people concerned that the method of preparation might have changed.

Please be reassured, and in turn reassure any clients who might be confused, that because of the labelling laws and the alcohol strength of the brandy used, Nelsons can no longer label the remedies as containing brandy. (And we are told that in some countries the “brandy” label might mean they have to be sold in off-licences instead of pharmacies and health food stores!) “Grape alcohol solution” is a descriptive term for brandy – it is just another way of saying it without actually saying it.

Anyone who has been into hospital for an operation or some other procedure under general anaesthetic, may have experienced depression for a few days afterwards. Most people who are affected this way, feel only a mild lowering of spirits, although some people suffer with quite severe depression.

The remedies can of course be of great help during this recuperative period – Mustard for example, would be useful for the classic descending gloom for no apparent reason, and very often, this would be the remedy that would most likely apply. However, as always, one cannot generalise. Someone else diagnosed with post-operative depression may well be unhappy about the treatment, or down because they are having domestic problems and are anxious to get home. Gentian therefore might be more appropriate for these situations. The crisis combination, because it helps to relieve shock, panic, fear etc., is invaluable after an operation and enables the system to recover from the trauma. Pre-operatively it is also a great comfort because it is so often the thought of what is to come that causes so much anxiety.

We are often asked what remedy would usuallybe recommended both pre- and post-operatively, and although remedies should be chosen according to individual needs, we would always suggest the emergency mix as a possible help. However, one practitioner recently brought up a very valid point: what does one do when the hospital policy is “nil by mouth”?

This may indeed cause a few problems. However, there are still things we can do. Most hospitals these days are not so rigid in their ruling, and although patients will be banned from eating or drinking for a set period prior to an operation, and although it would depend largely on the type of operation that is going to be performed, there is usually a little flexibility where sips of water are concerned. If possible, therefore, the remedy drops can be added to this.

However, if the fluid intake is totally restricted, then the remedy can be applied externally to wrists, temples, behind ears etc. The lips can also be moistened, and the remedy given via a mouth-wash if the patient can bear taking a sip and spitting it out again – a tall order when the patient is so thirsty!

Hopefully with the trend towards a more open-minded approach to patient-centered care, there will be ways and means of enabling patients to receive the help they need to lessen their ordeal at least a little.

Thank you, Tina, for raising the above point.

You may have read in the last issue of the Bach Centre Newsletter about a proposed series of one-day seminars taking place at various venues around the country. These commenced in January and are organised by Nelsons, in conjuction with ourselves.

The person who is actually conducting the seminars, Dominique le Bourgeois, has been a good friend of the Centre for many years. She knew Nora Weeks and has been involved in lecturing on our behalf, mainly abroad, for some time. She has also been an active practitioner for many years and so certainly knows her stuff!

The seminars are intended as an introduction to the remedies and are open to anyone who wishes to attend. It is a good way for interested members of the public to get to know a little more about the subject, and is an excellent first step for therapists who feel they would like to receive an insight before commencing a practitioner training course with us here.

Retailers have also found the seminars to be of great help in keeping them informed about the remedies they have for sale in thir shops. All in all they are proving to be very successful, and if any of you know someone who might benefit from such a seminar, further information can be obtained from ourselves, or from Nelsons.

We received a letter recently from a firm of development and land agents announcing the availability of space at some new alternative therapy buildings being proposed in Whyteleafe, Surrey and Scunthorpe Humberside. If anyone is interested please contact Graham Hercock, Eric Graham and Partners.

You will be pleased to hear that the high standards of production that Nelsons have pursued at Abingdon since it opened in 1991, have now resulted in the achievement of the British Standards BS5750. This also means that the necessary standards of quality control and level of production are such that Product Licences for each remedy can be granted, and this is the essential requirement for the EEC legislation which will come into effect from the beginning of next year (apparently!).

This means that the Nelsons remedies now have an “official” status and are recognition as over-the-counter homoeopathic medicines. Why homoeopathic? Because every product of this nature has to fall under one of four headings: “food”, “herbal”, “pharmaceutical drugs” and “homoeopathy”. By virue of the preparation method and for historical reasons, the Bach remedies are defined to be homoeopathic and as such are included in the British Homoeopathic Pharmacopoeia (as they are in the USA).

Those involved at Abingdon, in particular Bryan Hitchman, deserve a big pat on the back for achieving these standards and in so doing, securing the future of the remedies throughout the world. The upheaval that took place early in 1991 when the bottle filling and distribution moved from Mount Vernon to Abingdon caused rather a stir, and we received a number of letters and telephone calls which expressed a certain amount of concern (and indeed still do from time to time!), but you will all appreciate, we are sure, that it was a vital move and has, without question, been worth all the effort.

Those of you who have enjoyed Judy Howard’s Bach Flower Remedies for Women will (I hope!) be pleased to hear that a new book for children and adolescents has now been completed. It will be available soon, and is entitled Growing up with Bach Flower Remedies.

The book goes through each stage of a child’s life, beginning with babyhood right through to teenagers leaving school. It deals with issues like sleeping, feeding and communication problems, temper tantrums, going to school, bullying, shyness, sharing attention with a new brother or sister, coping with family relationships, puberty, personal identity and body image, adolescent moods, taking examinations etc., and how the remedies fit in and help to ease the emotional upset that can so often coincide with these events.

It has just been released and is available through the usual channels. For practitioners the cover price will be discounted.

Hope you will enjoy it and find it useful!

NB The new video – “Bach Flower Remedies: A Further Understanding” (see December 1993 Bulletin) – should be available by the end of the month.

Well done and welcome to the “family”!

With best wishes from us all at the Bach Centre.