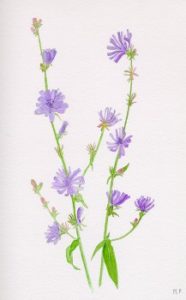 Hello all! Once again, apologies are perhaps in order for the time lapse between the last Bulletin and this one. We usually try to issue an Autumn edition, but as the summer one was so late, it seemed more appropriate to wait for winter. I don’t know what the weather is like further north, but we are still waiting for it to arrive down here! The warm weather has thrown the in-built time clocks out altogether – we have flowers still in bloom which should be dormant by now, others coming into bud long before their time – I even noticed some cherry blossom nearby. If the trees and plants are confused, what hope is there for the rest of us?

So, better late than never, your Bulletin has at last arrived – spurred on, I suspect, by the timely nip in the air this morning!

Now for the news…

Monsieur Revillion, who runs a Bach remedy society in France, held a major congress in conjunction with the Belgian branch of the organisation, in Tournai at the end of October. I (Judy) was invited to attend and deliver a lecture on the remedies and women, as the event coincided with the publication of Bach Flower Remedies for Women in French.

It was a very successful weekend, attended by about 300 people and speakers from various parts of the world. Certainly there was a great sense of mutual interest (naturally!), and everyone had the opportunity to meet other people of like mind, share experiences and generally stir their enthusiasm. A lot of hard work obviously went into its organisation, and the love and respect that everybody – organisers, speakers and the audience – had for Dr. Bach was really quite moving. It makes a change for me to get out and about and be involved in such an event, and although I was exhausted at the end of it, I thoroughly enjoyed the experience.

The Belgian chocolates weren’t bed either…!

You may remember that during the early part of this year, a series of one-day introductory seminars took place at a number of venues around Britain. They were extremely popular, the only complaint being that there were not enough of them! The seminars were a joint venture between Nelsons and ourselves, and we have been working very hard together in order to eventually bring about an international standard for education which will mean that people elsewhere in the world will have the same educational opportunities available to them as those in the UK.

To this end, Nelsons have appointed a manager who, although based in London, is working with us to achieve these objectives. Her name is Karen Chapman, and she has been involved since September. She is perfect for the job and already the plan we have envisaged for so long is beginning to take shape.

On the home front, a new series of introductory seminar days has been planned for 1995. These will begin at the end of January and run through until the end of the year. In addition, there will be regular weekend workshops for those who have either attended the one-day seminar or who already have a reasonable understanding of the subject and wish to take it further, discuss the practical aspects in more detail and learn the remedies in more depth. These will be of interest to those who wish to furhter their own personal knowledge for the benefit of themselves and their family, as well as to therapists who may wish to use it as a preliminary to attending the practitioner course at Mount Vernon.

We have enclosed half a dozen fliers in case you have any interested friends, colleagues or clients. If you need any more (leaflets, that is, not friends!), let us know, or telephone Karen direct, and a further supply will be yours!

Are “giving talks” your thing?

If they are, read on…

Many of you have already expressed an interest in giving talks to local groups, some of you have actually approached us very kindly offering your services. As explained above, a main series of seminars and workshops will be taking place and these will be conducted by Dominique le Bourgeois who does a lot of public speaking on our behalf and presented the seminars earlier this year. In addition, however, we receive the occasional request from local groups, societies, clubs etc., for a speaker to present a talk on the remedies at one of their meetings. Some of you will no doubt have already been approached in this way personally and we know that there are several of you who have been happy to oblige.

When we receive a request like this at the Bach Centre, we often invite the group to have a “day out” and come to Mount Vernon which of course gives them the opportunity to see where Dr Bach lived. Obviously, it is not always practical for them to do this, and consequently they are often disappointed because we are rarely able to give the talk ourselves.

What we propose to do, therefore, is compile a list of registered practitioners who would be willing to give talks, lectures, seminars so that we can refer interested parties to local speakers when the situation arises. No-one would be under any obligation and it would be entirely up to you to arrange time, date, venue, fee etc. with the organiser concerned. If you are interested and would welcome contacts of this nature, do please drop us a note to let us know.

A number of you have contacted us about the reference to “5x” on the Nelsons stock remedy labels. We have received several similar enquiries, so made a point of explaining the situation in the December Newsletter. For the benefit of those of you who do not take the Newsletter, the information is repeated here:

There has been a certain amount of confusion recently concerning references on the Nelsons stock remedy labels to “5x” dilution and “grape alcohol solution” which suggests to some that we no longer use brandy as our preservative. Let us please reassure you that grape alcohol solution is in fact simply a descriptive term for brandy. The preparation of the stock remedies has not changed, and the ingredients remain unaltered.

[A lower strength brandy is used in the stock remedies and Nelsons] are required by law to refer to certain items in a particular manner, and this is why the wording on the label varies slightly every now and then.

Similarly, the 5x dilution represents the equivalent measure of the [amount of notional solid matter in the remedy; it does not describe the dilution of mother tincture], but one again, be assured that the preparation of both the mother tinctures and the stock remedies remain exactly in accordance with Dr Bach’s original instructions. No matter how the process has to be described, the method of preparation will always remain steadfast.

Whilst on the subject of labels, those of you who have renewed your stock of “Rescue Remedy” recently will no doubt have noticed its new packaging. This has been introduced by Nelsons for a number of reasons, one intention being to enable it to stand out as in individual remedy in its own right.

It also became necessary to provide a great deal more information than otherwise appeared on the label, and this necessitated a carton which naturally provides the necessary space for indications and instructions. It was the creation of the box which started the ball rolling, resulting in the new design. The rest of the series – the 38 remedies and the cream – remain the same, in their familiar green and cream colour scheme.

Some people have expressed a little concern that it may not be as instantly recognisable as it was before because it looks so very different. However, it has generally met with a positive response and once it has settled in, will no doubt be regarded with equal familiarity.

who have all successfully finished the course since the last Bulletin – welcome to the Register!

This year has gone by so quickly, it is hard to believe that it was almost twelve months ago that we were trying to remember to write 94 instead of 93. Soon it will be 95! We hope the coming year will be positive and successful for you all, rewarding you with happiness and health, lots of good memories and an exciting future.

With best wishes from us all for a peaceful festive season. Snuggle up, keep warm and have a very happy Christmas.