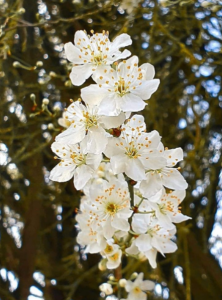 …is one of the remedies that Dr Bach grouped together under the heading Fear.

The Cherry Plum fear is very specific: it is the fear that one is going to lose control of oneself and do something dreadful, such as injuring others or harming oneself. Fears of going mad and of acting irrationally are Cherry Plum states.

Cherry Plum is also the remedy for a loss of control that has already taken place, because of the frantic fear and dread associated with such situations. Think of the fear a small child feels in the grip of a screaming, irrational tantrum: this too is a Cherry Plum state.

Cherry Plum is one of the ingredients in Dr Bach’s original crisis formula, which he put together for emergency use.

Fear of the mind being over-strained, of reason giving way, of doing fearful and dreaded things, not wished and known wrong, yet there comes the thought and impulse to do them.