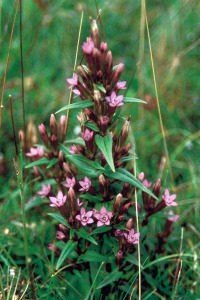 …is for that relatively mild downheartedness we sometimes feel when things go wrong. We miss a bus; fail an exam; miss out on an opportunity: it knocks us back.

Often the feeling lifts by itself, but the remedy can be used to lift it sooner so that we are able to make things go right instead of just hoping they will.

Gentian is often confused with Gorse, which is also a remedy for feeling down when things go wrong. The difference is largely one of degree.

People in a Gorse state have decided to give up. They refuse to be encouraged, and even if they seek a solution they will do so grudgingly, assuring everyone that there is no use trying. People in a Gentian state are less pessimistic and more prepared to try again.

Those who are easily discouraged. They may be progressing well in illness, or in the affairs of their daily life, but any small delay or hindrance to progress causes doubt and soon disheartens them.