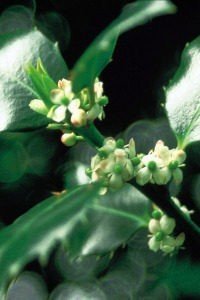 …is often thought of as the remedy for anger – but this isn’t necessarily the case.

In the Bach system anger is a secondary emotion and we need to look more closely at the cause. Anger based on impatience needs another remedy, for example, as do those angers based on feelings of personal unfairness or impersonal injustice, or where there is a simple loss of control.

Holly is actually the remedy for very negative, aggressive feelings directed at others – feelings such as hatred, suspicion, envy, spite.

The basic problem in a Holly state is an absence of love, and the remedy works to encourage our generosity of spirit and an openness towards others.

For those who sometimes are attacked by thoughts of such kind as jealousy, envy, revenge, suspicion. For the different forms of vexation. Within themselves, they may suffer much, often when there is no real cause for their unhappiness.