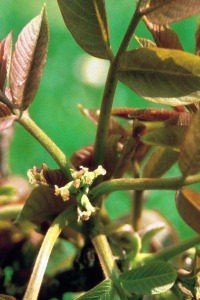 …is the remedy to help protect us against outside influences in general, and against the effects of change in particular.

Walnut people are fulfilling their purpose in life but sometimes doubt their path when they hear the opinions, theories or beliefs of others.

Unlike Cerato people, those in a Walnut state don’t actively seek out the opinions of others. But opinions are offered anyway: they may be affected almost despite themselves.

As a remedy against the effects of change, Walnut is useful at all the transition points in life, from birth to teething to going to school to puberty to marriage to childbearing to retirement and beyond.

It helps break links with the past so that we can move forward more easily.

For those who have definite ideals and ambitions in life and are fulfilling them, but on rare occasions are tempted to be led away from their own ideas, aims and work by the enthusiasm, convictions or strong opinions of others. The remedy gives constancy and protection from outside influences.